So I started with the War of the Spiderqueen Trilogy… I have to admit – it is not the book of choice – it is more like a few puzzle-pieces I would like to know the get the whole picture. But it did start quite nice… I’ve not been that much of a drow-friend/-fan lately, remembering the days when I read the fabulous Legacy – things were a bit different, but over the years the world down under has not been my main interest.

More promising than the imminent surroundings down there was the aspect that Salvatore asked/chose six different authors for this saga – while I don’t have to tell which one is my personal favorite – it still seems a very interesting project and I recently finished part I of VI.

Richard Lee Byers didn’t captivate me all time, but he did a good job on the general flair – took always good care to show the surroundings. Honestly I did not like Triel that incompetent – of course I loved Ryld who one of these flesh-made “not that evil” drow with thoughts that are not that chaotic, not that evil and still stuck in this society. What I think he did one of the best jobs ever was flashing out the magical rituals. He took care to make sure every material component was described – the arcane syllables were mentioned and the gestures described – so he took hold of great scenes with Gromph, Pharaun and I have to admit his demons were quite nice. The downsides for me was as said before Triel who was utterly incapable and too easily manipulated and the incredible struggle of Gromph’s Sister Quenthel – who managed to take hold of several utterly powerful demons without a lot of magic. Well, I’ve honestly read a lot worse and think it was a captivation after all. 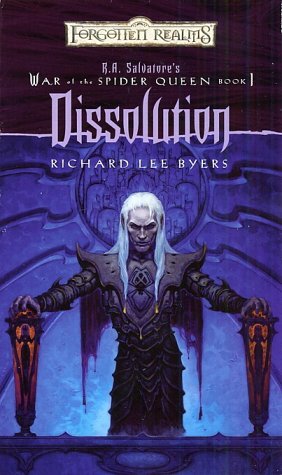 Let’s see how nice Thomas M Reid’s Insurrection is. I started moment ago.