If you missed part 1 & 2 of this story, I recommend reading it – after all it’s an adventure writeup.

After entering the ship to cross Lake Ashane it started with a strange occurance when in the heads of Lysalis and Enelya, voices in a strange, barking tongue (the players guessed it could be hobgoblin) echoed. Those sounds were hardly pleasant, more of a requesting or – commanding type. Only hours later Lysalis removed the cursed, black ring from her finger – giving another riddle without a clue to wizard, theurge and cleric who were all trying to remove the other ring, this time from Enelya’s hand but this one was still enjoying a very strong, cursed bond… Meanwhile it was the keen eyesight of a few party-members, that revealed they were watched from below, a few frog-like eyes that oddly reflected some sunlight. The red sabre was sailing hard towards the evening and gave Enelya, Lysalis, Sanchy, Livia, Whuryni 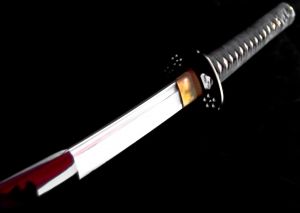 a and Daec a immediately the whole crew of the ship and of course the party members, too got a good idea of why Kua-Toa are called Merchantsdoom in this region… A hard, though not very long fight started – and ended with two kua-toa killed in the water and three of the sailors missing. With captain Faeltrag losing somewhat like-a-son, he ended up very drunk. An opportunity not to be missed by some of the party to talk the first officer into taking the steering wheel and ending up shipwrecked, but very much where the characters wanted to go, a little later…

After deciding it was time to leave, the ship wasn’t beyond repairs but the wrath of the captain, if he sobered up within the next days, would be great – it was the whole group heading towards the outpost Kront, which was probably the nearest city-like thing to their route. (They are still heading towards the camp where a few fire-rings are to be found).Â  Supposedly a lot larger by tales, it is a few-hundred-souls outpost at the crossroads of the Cold Road (a northern traderoute) and the Great Road (the Western traderoute) and therefore a place with a lot of action ongoing… On the way there Enelya turned around and escaped the others. In this situation it was obvious that the barbarian woman was not herself but neither force nor magic at hand seemed capable of holding her back. (It was a suggested character change from my side with a particular plan in the back of my head).

The only tavern of Kront the well know “Foundering Nag”, supposedly famous for his reasonable prices and excellent cuisine, bathing-tubs and suggestive additional services gave a place to rest and gain a bit of information. It did not take long until the party heard of a regular guest called Naulgh who was able, according to the innkeeper Fayelian, to perform powerful magic. The description of particular red-robes made the party obviously a bit uncomfortable – there are, after all – some tales about those, especially from where they just came from.

There was a lot of time to talk, craft and take care of different things (I won’t go into detail here) and all of a sudden, with most of them sitting in the Foundering Nag, a portal opened outside with a strange, bald human, with an even stranger symbol on the back of his head (antlers on a brownish triangle) hurried inside the tavern and handing Daec a beautifully bound, blue Leatherbook with a seal on it… The stranger to most (since Daec knows who he is) disappeared as fast as he came – only to have the blueish portal replaced by the appearance of an Inevitable – someone who was tracking the bald man – and he asked a few questions which wereÂ  (by truthfully answering) blocked by the party and led to the imminent leave of the creature to get back on track. It seemed very tense having a third of the party taking care that the innkeeper relaxed, and the remaining lot not-so-certain whether they should hang Daec for whatever had happened here. The powerful aura of the Inevitable gave them just an idea what this was all about – or? Was there something powerful behind all this? There was not a lot of time because when Daec reappered in the tavern mainroom, it was all of a sudden very silent – for Naulgh had entered.