…or eeks – why should I do that? Politics…

It’s easy – because you’ve got some really powerful characters running around and politics are always interested in having the big ones on their side. So we’ll have a close look to the politics of various groups, regions and perhaps individuals that are parts of it.

Â That doesn’t mean you’ve to be the best diplomat and you don’t have to prepare a kingdom’s daily business (though if you like to think about this, it might be helpful as well). What it means is, you should prepare long-term and short-term objectives for every nation involved and for every party involved. I’ll give you once again an idea of what I’m talking about with a small mind-map (I tend to find Freemind still useful ;)). 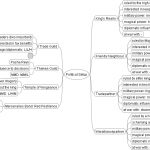 First I’ve set the most important nations on one side of the mindmap, if you’re dealing with more than 4-5 I suggest you use a single mindmap just for the nations-setup. And then I put a few smaller organisations into it, this can be everything from a group of adventurers to the high temple of a new or old faith. Your main focus should be to find a few possiblities for interactions between those factions. There may be old enmities or new ones that are based on whatever you can imagine. Maybe the old guildleader was in perfect favor of a god and the new leader has failed to show his proper respect (in gold…) so far. There’s a lot of potential for side-plots and those will lighten up your game – these small tidbits of background information should be a core task of your preparation, that’s why I put it so late into the whole setup scheme. You will need to know a few npcs from every faction, if you haven’t done that so far, you might want to put it onto your npc list as well, I guess names and some strange habits will suffice, a thieves guild leader who doesn’t like rats or has a real phobia of darkness will make your players smile for a moment, that’s usually a good idea as long as you don’t make this a general status quo in your campaign. (The weird things, not the smiling).

Now it’s all about you making plans for the adventure, you’ve got a lot of stuff already prepared or created, use the mindmaps of characters and their ambitions – use those of guilds and factions and use the region. You can start a war or try to have the players avoid one, you can undermine the authority of the king by having several guilds work together.

What should you always have in mind when it comes to politics?

Love and Hate
perhaps it’s time you look back to the different motivators and have the political figures have motivations on their own. As you probably know yourself, love is one of the strongest out there as is hate. When it comes down to a royal court, these emotions may be hidden well (have a look at yesterday’sÂ  necromancer, who himself is part of a king’s council…) Don’t make a blunt attempt on weaving everything together, it’s something to use with a plan, the classic mage that fell in love with the king’s daughter can make a great villain or ally. He has no real chance to get what he is looking for and you can make him the gruesome old wizard who tends to take what what he thinks is his (though he knows that he will have to trick the king in seeing something completely different) or make the wizard a handsome young fellow who knows his love is lost to him and give him a chance to express his feelings to the characters after they helped him or vice versa.

Intrigue
oh yes. I mean oh no! It has been a while since I played games that were based on intrigue (world of darkness) and back then I enjoyed this quite much. Intrigue is everywhere, not to see it is usually to go down at court. While everpresent you should not overstress this point unless your players enjoy it very much. (as always)
I suggest you spin a few intrigues with the council, intrigues are shiny when you play them against unfriendly characters and they tend to be vile and unfiar when you play them against friendly ones. Use this position to get an unexpected turn in your adventure – your epic party has saved the friendly young fellow that’s the realm’s foremost wizard and soon to be advisor to the king. He helps defeat a vile scheme ongoing for many years against the king and becomes his chancellor or must trusted counselor. A year later the king is hardly the same, he seems to wither slowly and die out of no plain reason and suspects he is being poisoned by…. (some familiar person) – in truth it’s the wizard who is keeping the lifesigns of his king low to rule in his stead, and maybe he never was the handsome friendly fellow but a great impersonator… There are countless possibilities for you here, use them!

Nobility and Royality
life at a royal court is different, push the characters to learn a bit of etiquette. It makes quite a difference if you address your king as my lord or my king and speak as king in third person or if this is just another npc. The same is of course valid for the gutter guys the other way round…

Ambition
a most important feature on your npc chart for political stuff will be the amount of ambition and the interest every character has. The handsome wizard we’ve been mentioning (third person :)) before might be the king’s advisor and a powerful mage though he is very young, when he poisons the king and slowly drains the life to get a hold on the kingdom it might not be of his own motivation, it might be the Yugoloth behind him that granted him power and supported his magical ascent in the first place that came to ask for a few small boons which the mage in his young years granted the demon. Maybe you have a few hidden forces and factions behind everything – I just advice you not always take the same driving forces, once your players learn of them it will start to get a bit mono-coloured and straining a topic hasn’t done a lot of good when you have virtual endless possibilities for change.

Howto extend your experience in this?

Politics are not every gamer’s favorite, I guess in our time it’s obvious that many people tend to ignore politics as something they have no influence in. Still in real life it’s true and in fantasy campaigns as well, the ones that hold power have ambition and usually some plan – may it be a great virtue or just another blunt approach to get more power. In the game politics will increase your fun factor if used wisely since it’s nothing more than another net of game-depth. You can use official events – couriers and courtesans, you might like official events like a ball (dancing event) or a formal meet and greet with another ambassador. You can declare war and peace and the good thing in games this doesn’t hurt a single individual while increasing the satisfactory level of your players greatly. Have fun preparing and I hope you’re looking forward to the last two chapters of this series when we create the action plan and go together through the whole preparation process once again.

The whole series (links to the posts will be active after publishing of them).